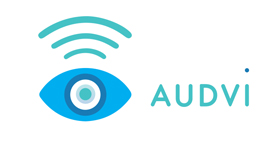 Audvi has built a mobile application with the goal of allowing anyone with a visual, literacy, language, or other barrier access to written information. And with studies showing that around 60 million Americans (1 in 5!) have difficulty reading, there’s definitely a growing need for a technology like this. We sat down with their co-founder and CEO Dusten Pecor to talk about their product, goals, and exactly how we should all define dyslexia. [To participate in their beta testing click here]

Q: What is Audvi?
It’s a mobile application for those that struggle with printed text, both people that are dyslexic or visually impaired, is the most straightforward way to explain it. The app is a document reader and that’s great, but what it represents is that it’s something that can change people’s lives and have a huge impact on information.

The example I give is that the only difference between my dad and I (both of whom are dyslexic) is assisted technology. I was able to finish at the top of my class, go to college, and get a job. I would buy new textbooks, cut out the pages, and run them one page at a time through OCR (optical character recognition) software to be able to hear the textbooks, which was a process that took several hours and even days sometimes. But compared to what my dad had it was a huge step in the right direction.

Q: What is dyslexia?
Dyslexia is a learning difference. It’s not cognitive issue, but a neurological one with decoding information – it’s difficult for people to understand particular sounds. There are about 60 million people in the United States alone that have dyslexia.

A big issue with dyslexia is that we don’t teach teachers how to teach students how to read. I’m in involved with a few organizations that focus on reading fundamentals and development and about 1 out of every 10 teachers surveyed says they know how to teach someone that’s dyslexic.

Q: Are books already on the app and can you load any book you want in the app? Tell me about that process.
Initially we’re controlling the content. There will be pre-populated information and we’re working with local government and organizations to getting the word out so that all the content is accurate and it’s in a form that can be utilized by our technology.

It’s not as simple as just taking a picture of the information and scanning it in because the flash or glare or things like that will influence the image and it won’t process correctly. We’re creating a tool that will allow for the content to be digested in a logical way into the app and once that’s ready we’ll allow for others to generate their own content.

Q: What is the focus of the content?
We have two main focuses, education and health care. As far as the government goes, those documents already exist and they’ve spent millions of dollars on those so all we need to do is “drag and drop” that content to make them available with Audvi. We’ve spoken with the mayor’s office about marketing so this content is available through our app and people that need it can access it whenever they are in situations like being at the courthouse or waiting at the DMV.

We’re also working with some of the biggest restaurant chains in the nation; McDonald’s, Applebee’s, Starbucks; about making their menus available through the app. That way, you can be in line at a Starbucks and instead of looking up and trying to decipher the menu you can just listen to it through the app.

Is there a target audience for the app?
Yeah, so the main audience is those that are dyslexic, which we already talked about a little, but there’s also a market for people who speak English as a 2nd language. Our app is able to do translations, which is hugely beneficial to this segment of the population. Many times, for example, a Spanish speaker will go to a government building and not be able to find the Spanish version of a document, even if it exists, and they’re left trying to decipher the English one. Our app would allow them to hear the document in their native language because, again, the content has already been pre-populated.

There’s also a market for the visually impaired. Most can’t read braille, but even if they can when was the last time you went to McDonald’s and saw them handout a braille menu? Or Starbucks? It just doesn’t happen.

Q: What’s the current solution at, say, a government building if someone with dyslexia comes in and needs assistance?
Currently, someone gets pulled from the back of the office to read to the person, which isn’t convenient for anybody and people are embarrassed to ask for those services. I mean, you’re never going to have me, a grown adult, ask someone from the back come out and make a huge deal out of me needing them to read a form. People just aren’t going to ask for that help.

This is the power of Audvi – being the link between the organization and the individual and making that conversation an easy one.

Q: Do you have partners in disseminating educational content?
We’re currently partners with San Diego Council on Literacy, and talking with 6 or 7 other organizations: Read San Diego, John Corcoran Foundation, United Way.

We’re currently in talks United Way about doing a pilot program. They recently were gifted some money with the goal of helping kids read by the 3rd grade and so we’re working with them to be part of making that goal a reality.

Q: What has been the biggest challenge? And what do you think will be the biggest challenge moving forward?
There are so many different ways we can go and so many people asking for help that we have to decide where to draw the line. We’re not going to help anyone if we’re all over the place, which is why we’re focused on education and health care.

Moving forward, people want to know how to make money. To me it’s clear – we’re giving businesses access to billions in disposable income that they currently don’t have access to – but we still have to communicate that effectively. I’m confident there’s an opportunity there; it’s just about finding the right investors.

Q: What has been most significant achievement?
I’ve been pitching this for what feels like forever. I think the big achievement for the idea and company was getting into EvoNexus because it solidified to my team members that this concept and product is real.

Q: How has EvoNexus benefitted Audvi?
A while back I pitched ideas to 3 VCs and they all told me go in an incubator and then get back to me, and looking back I think that was great advice. EvoNexus gave us support and solidification that we’re doing something that has value.

The advisors, from day one, have been easy to talk to, and there’s a diverse group. There are advisors from mobile and from finance and anything else that you might need. It’s been huge in making connections, like the [MarketLink] presentation we got to do with AT&T. All around I just think we’ve been able to get really great advice while being in the incubator.

Q: You recently went into beta. How’s that going?
We were looking for feedback on the product and to work out some of the kinks, but during beta what we’ve really found out is that we’re going to have to build our own document reader and editing tool that I mentioned before. We’re in the process of building that, which is good because we can patent it, but it also means that product launch and the whole process is going to take a bit longer. However, we expect to be in the app store by mid-March.

To learn more about Audvi and to participate in beta visit audvi.com.