Kadho’s tagline is “preserving the abilities that children are born with,” which is simplistically brilliant. The company is building products that will tangibly improve childhood brain development and enhance language learning. With their first few products just weeks away from launch, we sat down with co-founder and Chief Scientific Officer Dhonam Pemba to talk about brain development, their products, and the key differences between languages across the globe. (To learn more about Kadho visit kadho.com)

What is Kadho?
Well, we’re taking a lot of brain research, almost 50 years worth, and then translating it into interactive content: games, eBooks, for example. The idea behind that is that these products will enhance human capabilities cognitively, and we have analytical dashboards to display potential improvements as well.

Initially our target is children and helping their brain development, but we’re also targeting athletes, as well. Overall the idea is just to enhance the brain with audio-visual stimuli through interaction with our games and scientific content.

How does the product help with brain development?
The initial idea behind the company was that we were trying to learn Mandarin and it was very hard because we weren’t able to process the sounds in the language. Every child is born with the ability to learn any language. Children are born with the ability to hear sounds of all the languages of world. However, between 10 to 12 months they can only hear sounds that exist in their native language that they are exposed to. This is why Japanese people who aren’t exposed to English as a child have trouble pronouncing the L and R sounds of English, these sounds just don’t exist in their language. In addition, if you grow up in an English-speaking environment then your brain isn’t wired to process tonal sounds in languages like Mandarin.

We realized that being able to process these tonal sounds could be improved if you develop it early, and if children develop this ability then it stays with them permanently. This phenomenon is called synaptic plasticity. This allows them to learn languages better and more accurately interpret the sounds of different languages. Before children are 3 years old their brain is absorbing everything they hear, and our products provide sound stimulation so that those children are absorbing the sounds of different languages. We are providing the building blocks of language acquisition at the time of life that matters the most.

Has there been any research done on this or have you done any of your own research?
We built and tested several games that expose babies to key units of sounds from our sound database. The results of these tests were extremely encouraging and we will be publishing these results soon. In addition, over 50 years of science has shown the first few years of a child’s life create the foundation for their future. During these years, a child’s brain undergoes phenomenal growth that is unequalled to any other time of life. This time is a window of opportunity for the proper formation of neural circuits that enable the growth of neurobehavioral capacity, and development of neuronal systems providing sensory, perceptual, and basic memory functions. These systems form the neurofoundation for intelligence, social skills, language, speech, and self-awareness.

During the first year of life, babies lose the ability differentiate sounds not in their native language; fortunately this loss can be reversed. However research tells us convincingly that there is a critical time window for implementing the process of reversal. After roughly the age of 4, the loss is permanent.

Research also confirms that the brain actually restructures itself not only while learning a language but even while just being exposed to it and that it is permanent. Generally, the left side of your brain is for language and the right side is for music. And Chinese is a tonal language so people that don’t speak Chinese hear it and process it in their right side as music, while native speakers would process it on the left as language. Recently scientists have studied Chinese adults who had been adopted by French families at around 12 months of age, obviously before they actually had learned Chinese. After adoption, these children had no more exposure to Chinese. When the researchers compared the brains of thee children to other French-speaking children, the brains of children born in China reacted differently to Chinese tones.

What is an example of a type of game?
We offer mobile computer games. One example is a Mochu-Pop game where children pop balloons that are in different shapes. Mochu is the name of our main character that is a penguin helping kids preserve and potentially enhance the innate abilities they’re born with. In this game, the child is presented with the shape first and then a bunch of balloons fly up on the screen and he/she has to touch the right balloons to match the shape. But when a balloon is popped the kid hears a sound, which are the sounds that are foundational to a language. The children hear the easier sounds first and the harder ones later, same as a child learns language in real life. 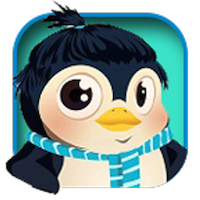 We also have e-books that incorporate some of the most important words to language so you can read the book and your brain is being stimulated by the special words sprinkled throughout the book. You can hear a book in several different languages [see below] so the child gets exposed to all the sounds present in other languages.

What has been the biggest challenge so far?
There have been a lot of challenges, but the biggest one has been staying focused. Sometimes we get caught up in wanting to do everything and having a bunch of ideas, but we don’t have the resources to implement those ideas.

The second thing, at least for us, is recognizing where your weaknesses are. At first when we started the company, we were trying to do everything ourselves, but that didn’t work. For example, I’m not very good at writing stories or designing games, so I probably shouldn’t be trying to do those things for our products. We learned to trust other people and relinquish control in the areas that the two of us weren’t experts.

What has been your most significant achievement?
This kind of goes back to building our team, but our biggest achievement has been putting the science, business, and entertainment aspects of the company all together successfully. Sometimes scientists, for example, don’t want to get involved with corporate people, but our team works together really well and is all intertwined. I think building the team was probably our biggest achievement to this point. Beyond that, the feedback that we’ve gotten from our user base, emails from the new parents communicating how much the appreciate what we’re doing has been the biggest achievement and biggest driving force for us.

When will the games be ready?
We’ve been testing games in preschools and daycares to get feedback on usability and how kids enjoy it, and now we’re ready for 2 games and 2 e-books to be launched by the end of April.

How has EvoNexus helped Kadho?
It’s helped a ton. We know what we’re missing, and with EvoNexus and their mentor network, you can find anybody you need. It’s opened doors to a ton of networking opportunities. Normally a meeting with Qualcomm and LG, for example, would take years to get, if you got it at all, but with EvoNexus you have that access just by being in the incubator and making a good product.

For more information on Kadho and to sign up for early access to their product visit kadho.com.