Entertaining in a Mobile World 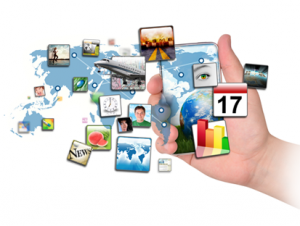 Entertaining in a Mobile World

In the last few years eyeballs have rapidly shifted focus to the smaller screens of mobile devices. Find out how the Entertainment industry in particular has adapted and thrived through this transition. Our panel will include leaders from the Entertainment business discussing mobile apps, mobile marketing, and how social media and traditional marketing drive conversions in the mobile space.

PANELISTS
:
Mike Barboni
Sr. Director of Product Management, Gimbal
Mike’s career in mobile spans more than 15 years and includes work with every aspect of the mobile ecosystem.  He joined Qualcomm, a world leader in 3G, 4G and next-generation wireless technologies, in the late 90s and was part of the team that brought mobile apps and the concept of app stores to market on a global scale.  He’s worked with hundreds of mobile application developers, network operators, brands and venues around the world and has been involved in either running, sponsoring, speaking, or participating in numerous mobile development conferences, workshops and hackathons over the course of his career.

Mike began working on location-based technologies more than a decade ago including micro-location and proximity-based technologies that are currently taking the market by storm.  After deciding that he wanted to work more on emerging technologies in the contextual awareness space, he joined Qualcomm Labs, Qualcomm’s  incubator focused on leading innovation in new wireless product development.  While there, he worked on the early-stage building blocks that soon exited Labs and became Qualcomm’s new subsidiary, Qualcomm Retail Solutions as well as a new product, the Gimbal Context Awareness platform.

More recently, after securing funding and support from a number of forward-thinking strategic investors, that business has spun off from Qualcomm into its own standalone company, Gimbal, Inc.  At Gimbal, Mike is responsible for managing embedded software, hardware, and mobile SDK product for Gimbal’s Context Awareness platform.  Among other things, this includes design, development, and commercialization of Gimbal’s latest Proximity Beacons which have been commercially deployed with numerous brands, venues, retailers and as a key part of many other consumer experiences. Mike graduated from the University of California, San Diego and has co-authored multiple patents spanning a variety of mobile and location-based technologies in countries around the globe.  He is specifically focused on commercializing disruptive technologies that bring new and interesting experiences to consumers.

Jeremy Duimstra
Co-Founder and CEO, MJD Interactive
Jeremy Duimstra began his career with a big move from Michigan to Los Angeles. While in Tinseltown he had the opportunity to design DVD interfaces for Dreamworks and Universal Studios, including some notable movies such as Caddyshack, Animal House, and Slap Shot. In 1999 a job opportunity emerged, pulling him back to his hometown of Grand Rapids, working for Amway Corporation on multiple digital initiatives, including one of the largest e-Commerce projects of its time. The siren song of Southern California soon became too loud to ignore, and Mr. Duimstra moved back to paradise – San Diego. There he founded Glimpse Interactive, an Interactive Agency specializing in digital marketing. In 2007 Jeremy partnered with good friend and respected business development superhero, Mike Maginnis. The two Co-Founded MJD Interactive Agency which has become one of the top Digital Agencies in Southern California. MJD’s clients include Oakley, Legendary Films, Vail Resorts, Titleist Performance Institute, NBC Universal, Sycuan, SDG&E, DJO Global, Riot Games, Falken Tires, Bad Boy, Tony Robbins, Qualcomm, Marzetti, Pfizer, UCSD, SDSU, LG, Althea Technologies, and many others.

An avid public speaker, Mr. Duimstra speaks nationally to groups to help them harness the power of User Centric Design, User Experience & Design and Mobile Application Development to achieve real, measurable results. Jeremy focuses these discussions on a mix of best practices, case studies and the real nuts & bolts how-to information that are required to take actionable items away from the event.

A graduate of Harvard Business School’s Digital Marketing Program, Jeremy is constantly looking to learn new things about the digital world around us. Part of learning is giving back what you know to the community, and to achieve that Jeremy serves as the Adjunct Professor of Web Marketing Strategies at the University of California, San Diego Extension Campus. He is also currently serving as a Co-Chair of the CommNexus Marketing SIG.

MODERATOR:
Kevin Winston
Founder & CEO, Digital LA
Kevin Winston (@kevinwinston) is the founder of Digital LA, the LA-based networking group of professionals in digital entertainment (movies, TV, web series, music, games, VFX), start-ups, social media, marketing, and advertising, reaching more than 50,000 members via its newsletter, Facebook, Twitter and LinkedIn groups. digitalla.net, @DigitalLA.Kevin is also founder of Silicon Beach Fest, the first and largest tech, startup and entertainment conference in LA. The fest brings together LA’s accelerators, startups and Hollywood digital entertainment, and attracts more than 3,000 attendees with a multi-day fest in the summer, and a one-day event in the fall. Silicon Beach Fest has been covered by Forbes, TechCrunch, PandoDaily, LA Times, and other national and local press.Previously, Kevin worked at Fox Interactive Media, MySpace, and IGN where he created social media marketing campaigns for movies, TV shows, web series and video games. Prior to that, he worked at Sony Pictures Digital Entertainment and McKinsey & Company, the top management consulting firm. Kevin has spoken at numerous tech / entertainment conferences including: SXSW, San Diego Comic-Con, Social Media Week LA, NATPE, Film Finance Forum, Silicon Beach Fest, Digital Entertainment World, Games Marketing Summit, and Digital Hollywood.He was named in a recent Forbes article as one of “12 Entrepreneurs That Are Changing LA Forever.”  Kevin graduated from Yale University, and has a masters from Harvard University. He also co-founded and is President of both Yale in Hollywood and IVY Entertainment, both networking organizations for alumni in entertainment.

PARKING: Please park in the 101 W. Broadway parking garage.
Bring your ticket upstairs with you to the 2nd floor for VALIDATION!