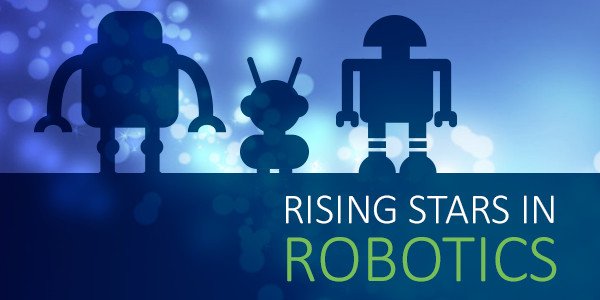 Once considered a topic for science fiction, Robots are quickly moving out of controlled environments into our immediate surroundings. With improvements in capabilities around perception and sensing, robots can soon “think”, “sense” and “act”. Quite soon we might have robots like Rosie from Jetsons or Wall-E with advanced perception capabilities working with us. Have we arrived at a commercial robotics era where the use of robots will be pervasive across functions and industries? Will robots work alongside humans to perform the “dull, dirty and dangerous” jobs? What are the implications of that?  What role does mobile phone technology play in this emerging market? What are the emerging opportunities created by advances in robotics and man/machine interface ?  What are the opportunities for startups? How should society plan for this transition? Come learn about the hot developments taking place in robotics and where this industry is headed through our excellent panel of “rising stars in robotics.”

Siddharth Mohan is the technical lead and head of inventor-inspiration for Qualcomm ImpaQt, the company’s global employee innovation and new technology incubation program. Sid works with the ImpaQt team to identify and nurture intrapreneurs from across the company.  He specializes in identifying great ideas in new technology areas including robotics that can become future products for Qualcomm.  Sid has moved the process of forming engineering teams around budding ideas to an art and he is passionate about providing strategic direction to transition conceptual prototypes to full fledged projects.  Prior to working on ImpaQt, Sid served as a research engineer for many years with Qualcomm Research, where he worked on designing algorithms and techniques that are part of every smartphone sold today – enabling people to communicate faster and better over the cellular networks that we all enjoy.  Sid has a Master of Science degree in Electrical Engineering from Penn State University and 3 patents issued with 16 more pending with the US patent office.

As CEO and co-founder of 5D, Mr. Bruemmer provides leadership and vision guiding the development and commercialization of robotic software. Mr Bruemmer enjoys finding ways to fuse emerging science and engineering into innovative technologies that can change the way robots interact with humans and their environment. At 5D Robotics, Mr. Bruemmer is building the R&D capabilities needed to support standardization, consolidation and productization of intelligent robot software across industry and government programs. Mr. Bruemmer is currently working with many different robotics and sensor companies on a variety of robotic countermine and explosive detection capabilities. He has invented robotic solutions for landmine detection, defeat of improvised explosive devices, urban search and rescue, decontamination, chemical plume tracing and decommissioning of radioactive environments, air and ground teaming reconnaissance systems, facility security and a variety of autonomous mapping solutions. Mr. Bruemmer has authored over 60 peer reviewed journal articles, book chapters and conference papers in the area of intelligent robotics. He has been awarded 10 patents and is a winner of the R&D100 Award for his work in robotics.

Ryan is the Managing Director of the Qualcomm Robotics Accelerator, powered by Techstars. The Qualcomm Robotics Accelerator brings robotics startups from around the world to San Diego and provides them with seed capital and an intense four-month mentor driven accelerator program. As a 17-year tech veteran, including stints as founder of several startups, and an executive at many more, Ryan has spent the majority of his career building startups from the ground up and has experienced all stages of the entrepreneurship lifecycle from two guys with a dream to multi-hundred million dollar exits.

Prior to joining Techstars, Ryan was VP of Marketing for San Diego based ecoATM, makers of the robotic phone recycling kiosk, which was acquired by Outerwall. Ryan was also a founder at Neighborsville, Hi.Im, and Give2Schools, which all crashed and burned spectacularly. He graduated from Georgetown University and is a Fellow in the Aspen Institute Business and Society program. Born and raised in Encinitas, he lives in Carlsbad with his wife, three kids, and a puggle and is a fan of craft beer, fish tacos, and the San Diego Chargers.

Bret Wallach has been interested in robotics since he was a child and that interest intensified while concentrating in robotics during the time he was getting a degree in Computer Science and Engineering at MIT. When he graduated in 1981, sophisticated robotic applications were severely constrained by the primitive capabilities of computers of that era. In 1999, after stints in the defense and futures/derivatives trading sectors, processors had finally begun to catch up with the robotics applications and technology Bret wanted to pursue based on machine vision. As a result, Bret founded Vision Robotics Corporation and has led the development of vision based robotic technology, prototypes, and products for agriculture, floor cleaning, and defense since the founding of the company. Bret has numerous robotics technology patents.

Tim McConnell is responsible for engineering and product development at 3DR’s San Diego facility. Possessing over 25 years of experience developing robotics and embedded systems, Tim oversees project execution, engineering processes and coordinates activities between 3DR’s engineering department and the manufacturing facility in Tijuana. Tim’s background in robotics began with his bachelor’s thesis project at MIT, where he developed a calibration scheme for robots for the aircraft industry. Since then, he has managed multiple robotic development projects at Vision Robotics Corporation, specializing in autonomous, stereo vision-based mobile robots for commerce, agriculture and government. Prior to joining 3DR in 2013, Tim served as EVP Engineering at Solekai Systems, running an 80-person engineering department in the consumer electronics and machine-to-machine areas. Tim also held management and engineering positions at Wind River, Doctor Design, AP Labs and Linkabit. Tim received his bachelor’s and master’s degrees from MIT. When Tim is not developing hardware and software for 3DR or spending time with his wife and three daughters, he can be found running in San Diego canyons, swimming or kayaking in La Jolla cove, or skiing anywhere he can manage.

Once guests enter the parking structure, at Qualcomm, they can park where ever they see an open space. They will then take the elevator/stairs to the first floor and cross to walkway to the main building. There will be a staff to assist in badging them in through the secured doors.