The Future of Displays 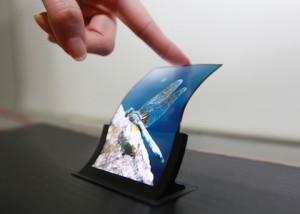 The Future of Displays

Display technology has evolved from being dominated by the bulky cathode ray tube TVs and computer monitors, to modern flat panel HDTVs and curved 4K Ultra HD screens, and to elegant smartphones, and even wearable devices such as Google Glass.

In parallel, the capability for interaction with displays is now possible.  Touch screens are no longer a novelty, and advanced gesture-based touch and camera interfaces are offering new means of interacting with devices.  In the 2002 film “Minority Report,” a futuristic display interaction was featured, which is only now becoming a reality.  Modern devices are increasingly capable of using multiple means to sense and anticipate human interaction.

Our expert panelists will describe these advanced technologies, and project when we will see them in the market.

PANELISTS:
Dr. Mainak Biswas
System Architect, Qualcomm Inc.
Dr. Mainak Biswas is a system architect at Qualcomm Inc. Prior to that he led Qualcomm’s display systems effort for emerging market smartphones and was responsible for the display system architecture for Snapdragon 410 and 610. Currently he is working on the architecture for computer vision accelerator and automotive driver’s safety assistance system for Qualcomm.
Before joining Qualcomm, Dr. Biswas spent 6 years in Marvell Semiconductor and National Semiconductor as a display architect. He was responsible for designing their video post processing SoCs and the Motion compensated frame rate conversion solutions. He received his undergraduate degree from IIT Kharagpur and graduate degrees in Electrical Engineering from University of California, San Diego in 2005. He has been an inventor with 30+ US patents and patent applications, and won EDN award for technology innovations. He has authored more than 20 scientific publications in journal and conferences.

Barry Sandrew, Ph.D.
Founder, Chief Technology Officer and Chief Creative Officer, Legend3D, Inc.
Barry Sandrew, Ph.D., is the Founder of California-based Legend3D, Inc., an innovative 3D visual effects and conversion company, where he currently serves as CCO and CTO. Under Sandrew’s creative and technical leadership, Legend3D was a primary 2D-to-3D conversion partner for two of the films honored in the 2012 Academy Award for Hugo and Transformers: Dark of the Moon. Sandrew is an internationally-recognized visual effects pioneer and digital imaging expert with more than 14 VFX patents and 23 years of feature film and TV experience. Leveraging his original patented digital systems and processes for colorization, he created the company’s proprietary 3D conversion software, whose unique geometry mapping capabilities can adapt to any project to meet specific requirements.

Sandrew was previously the founder and CTO of American Film Technologies (AFT), a pioneer colorization company and utilizing his patented technology, AFT colorized more than 200 motion pictures, 170 television programs and 90 animated cartoons under his management, accounting for over 80% of colorized product worldwide. After leaving AFT, Sandrew co-founded Lightspan, Inc. in 1993, one of the largest educational software companies in the U.S. From 1978 to 1986, Sandrew was staff neuroscientist at Harvard Medical School and Massachusetts General Hospital where he established three laboratories in neuroscience, including the first Neuroscience Imaging Laboratory in the Department of Radiology centering on MRI, CAT, and PET imaging of the brain. He also served on the staff of Columbia University, College of Physicians and Surgeons as an NIH Fellowship Awardee.

Pablo Espinosa
Senior Staff Engineer, Television, Home Entertainment & Sound, Sony Electronics, Inc.
Pablo Espinosa is a senior staff engineer in Sony Electronics’ Television group, part of the Home Entertainment and Sound division. In this role, he is responsible for design, technology development and technical communications within the television category. Pablo has applied his experience in product development, video and picture quality design to the launch of Sony’s 4K Ultra HD TV and 2K model line-ups. During his time at Sony, Pablo has been involved in the development of video systems for LCD TVs since their inception as a product category in 2004, and he has been a key contributor to the evolution of LCD TVs within Sony. Prior to this, he was involved in several other product category designs including CRT and Plasma displays.

Prior to Microsoft, Pat spent 15 years at Panasonic in senior management positions, including Vice President of Strategic Product Development at Panasonic Broadcast, where he helped launch DVCPRO and drive US strategy for HDTV. Pat started his career at RCA, earning eight patents in TV product design.

Pat has been an ATSC board member and Vice Chairman of the Board of the Digital Living Network Alliance. He served two terms as President of the IEEE Consumer Electronics Society. Pat is currently a member of the IBC Council, an industry executive advisory group, and of the Academy of Digital TV Pioneers. A SMPTE Fellow, he serves on the SMPTE Executive Committee as Vice President, Education. Pat holds a BSEE degree from Tufts University and an MSEE from Purdue University.

MODERATOR:
Louis Kerofsky
Principal Engineer, InterDigital Communications, Inc.
Dr. Kerofsky Joined InterDigital in August of 2013 where he is working on visual perception applied to video compression.  Prior to joining InterDigital, he was with Sharp Laboratories of America from 1999 to 2013 in the Advanced Video and Display technology group.  He represented Sharp in ITU-T standardization activities leading to the standardization of H.264/MPEG-4 AVC. He pioneered LCD power reduction methods based on synchronized backlight modulation and image compensation. Prior to joining Sharp he worked in the area of video conferencing.  He is currently a member of several professional societies including Institute of Electrical and Electronics Engineers (IEEE) Senior Member, Association for Computational Machinery (ACM), Society for Information Display (SID), Society for Industrial and Applied Mathematics (SIAM).  He has over 60 granted patents in the areas of video compression, processing, and display.  Dr. Kerofsky holds M.S. and PhD degrees in Mathematics from University Of Illinois Urbana-Champaign and B.S. degrees in Mathematics and Physics from Arizona State University.