A New Vision For The Future: An IoT Solution To Assist Blind People With Sighted Support

A New Vision For The Future: An IoT Solution To Assist Blind People With Sighted Support

Imagine waking up one morning to find yourself blind after a lifetime of seeing. This scenario became the reality of 35-year-old Eric Burton, an active and ambitious individual who was in the throes of climbing the corporate ladder. Burton was born with a rare degenerative eye disease called Retinitis Pigmentosa, which caused his vision to fade slowly until one day it disappeared altogether, “like a lightbulb switching off,” Burton reflects. He entered a period of darkness, both literally and figuratively, as even the simplest of tasks became daunting to him: leaving the house for a walk, meeting up with friends, ordering food, running errands. Life as he knew it was changed forever.

One day, Burton’s wife Kelly, an AT&T employee, came home bubbling about a phenomenal new partnership between AT&T and a tech firm called Aira that was trying to help blind people “see.” “Seeing” involved using video-enabled sunglasses to connect an Explorer, a blind person, with an Aira Agent, a remote guide who describes surroundings over cellular to help navigate an environment.

At first, Burton didn’t really want to hear about this new service. “Blind people get tired of everyone trying to ‘fix’ them,” he recalls, having now been blind for 20 years. “I’ve tried so many things, only to end up frustrated with my hopes dashed.” However, after a recent tumble over an un-parked city bike caused him to tear his ACL, Burton realized he had to try something different to navigate a world that was significantly more treacherous without his vision.

Burton agreed to try Aira and, after a short training period, he was ready to see just how far he could get with his new augmented reality tool. His goal: to surprise his wife by cooking her dinner, a feat that would require him venturing alone to the grocery store for the first time in two decades.  With the help of an Aira Agent named Jack, Burton called a Lyft to take him to Trader Joe’s. Once inside, Jack helped Burton to navigate the store, select good produce, and even pick out his wife’s favorite wine.

When Kelly arrived home that evening, Burton had not only completed his grocery shopping but also successfully cooked her an entire meal. As the realization set in that he had accomplished all of this, she ran and hugged him. The experience became a turning point in Burton’s life, opening new possibilities for him to run errands, meet his wife downtown for lunch, even to visit the Sculpture Garden at the Dallas Museum of Art to share the day with his son who has his MFA in art and poetry. Burton explains that his greatest excitement about Aira isn’t the things that he has been able to accomplish, but instead the things that he looks forward to doing, like reading books to his young grandchildren who don’t understand that he can’t see. His motto for the year is now, “What’s next?” 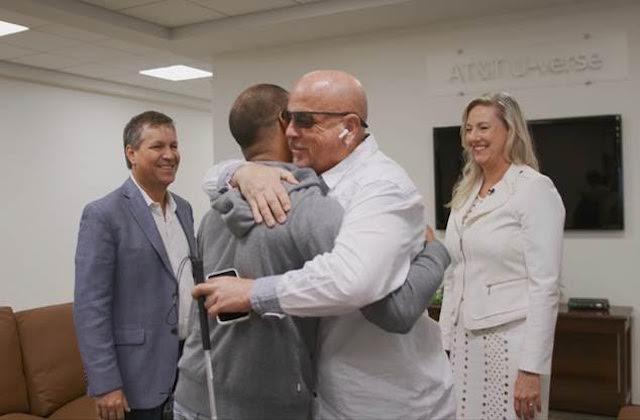 Aira founder and CEO Suman Kanuganti couldn’t be prouder when he hears stories like Burton’s. Kanuganti originally conceived of Aira after having a conversation with a blind friend about how Google Glass could be paired with a service akin to “OnStar” for the blind. The loss of immediate visual information is one of the primary challenges for those who are blind and waiting for assistance to navigate the world can be disempowering and costly. With more than 285 million vision-impaired individuals in the world, the market for sighted assistance is massive, topping out at $22 billion annually just in the US. “Tech never has been able to penetrate the blind community to help in a scalable way.  After decades the cane is still the primary tool,” Kanuganti explains.  He believes that AIRA is part of the answer, connecting humans through an assistive technology. While Kanuganti realizes that blind and low vision people have developed a number of efficient, non-visual techniques for functioning in all aspects of life, he believes that the support that the Aira service brings will add depth and richness to one’s life and will offer conveniences and aspects of independence not otherwise available through traditional approaches alone.

In fact, Kanuganti envisions that one day Aira could be a tool for both the non-sighted and the sighted. The trend in the digital era is to seek more information faster, but there is a limit to the amount of information that we can process. Aira utilizes an embedded AI agent named Chloe (a shout out to Jack Bauer fans from the TV Series 24) to learn and categorize information in the environment like airports or hospitals. In that sense, Chloe operates just like Apple’s Siri or Amazon’s Alexa with one significant difference—Aira adds human consciousness and emotion awareness to the mix through its live agents. Kanuganti adds, “Aira is the most humanistic tech that could exist. Why? Because on a fundamental level, yes there are cameras, lenses, and glasses, but Aira is just a platform for the solution: connecting humans to create efficiency and empowerment.”

AT&T is proud to have Aira as one of the first projects to come out of its AT&T Foundry for Connected Health, an innovation center for startups in the field. Chris Penrose, President of Internet of Things (IoT) Solutions at AT&T, first connected with Kanuganti in 2016 and was fascinated with the vision of using IoT to provide blind individuals with connectivity through a set of glasses, enabling users to navigate the world. Penrose also realized that AT&T could augment this service by prioritizing Aira data using its dynamic traffic management system to ensure the reliability of connectivity for individuals who depend on that connection for navigation. One year after meeting, Penrose and Kanuganti debuted Aira on stage at the Consumer Electronics Show in Las Vegas.

Since that time, more and more exciting use cases of Aira have emerged. For instance, AT&T and Aira partnered up to help guide Erich Manser, a vision impaired individual, run the Boston Marathonin 2017; Emmitt Smith helped individuals with low vision watch a Cowboys game by providing play-by-play feedback through Aira; and AT&T partnered with the National Federation of the Blind to help provide 100 glasses to college students entering their freshman year. Most recently, Aira announced that AT&T will now be its global data provider, extending service to Australia, Canada and the U.K. Penrose adds, “The world just got bigger. This global expansion can bring the Aira platform to millions of individuals who can benefit from this service.”

For all that we hear about technology disconnecting us, Aira is one technology that is actually bringing humans, specifically the sighted and non-sighted, closer together. For cautious optimists like Burton, having a technology that is designed not to fix but to empower is giving him a new way of looking at the world.

Amy Blankson is co-founder of the positive psychology consulting firm GoodThink and the author of The Future of Happiness.

Full article can be found HERE.