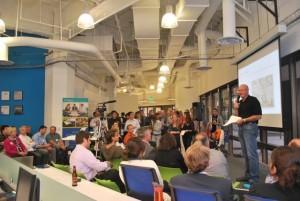 In addition, CommNexus is expanding EvoNexus outside of San Diego for the first time. It plans to open an incubator location in Orange County this fall.

Cisco will bring its Entrepreneurs in Residence program to EvoNexus this summer. The company will provide funding for young companies entering the Cisco program at EvoNexus.

Cisco’s participation mirrors a similar arrangement that EvoNexus has with Qualcomm, which provides up to $250,000 in seed funding to EvoNexus incubator companies that catch its eye.

The partnership is unusual because Cisco does not have a large footprint in San Diego County. Most of its personnel here are involved in sales.

But Cisco hopes to find startups in the region in industries where it expects growth, such as cloud computing and the Internet of Things.

“Launching CiscoEIR@EvoNexus allows Cisco to tap into the ideas and talent of the entrepreneurial community in the San Diego region,” said Tom Yoritaka, managing director of Cisco’s startup program. “We expect CiscoEIR@EvoNexus to play an important role in accelerating the growth of early stage start ups in San Diego and advancing the Internet of Everything, cloud computing, big data, enterprise mobility and other strategic areas for Cisco.”

Launched in 2009, EvoNexus provides free office space, mentoring and other services to young firms. Unlike other incubators, EvoNexus does not take an equity stake or charge fees to young companies in the program.

So far, 68 start ups have been admitted to EvoNexus, with 29 graduating and seven being acquired. The largest deal so far was Outerwall’s $350 million purchase last year of ecoATM, which makes cellphone recycling kiosks.

“That’s a really big deal, given the fact that we now have two Fortune 500 companies that are willing to fund early stage start up companies at EvoNexus,” said Moore.

EvoNexus expects to begin accepting applications for the Cisco Entrepreneurs in Residence program in late July or early August. “I think what would make it a success is for a company that Cisco funds to either be acquired by Cisco or graduate from the incubator and truly launch technology that is of strategic interest to Cisco,” said Moore.

EvoNexus also expects to open a new incubator in Orange County in November. It currently has locations in downtown San Diego and University City. The Irvine Co. donates office space to EvoNexus.

The roughly 12,000 square foot Orange County incubator will be located near the UC Irvine campus in an Irvine Co. office building. EvoNexus expects to seek applications late this summer and admit a half-dozen startups initially.

The expansion comes at the request of the CommNexus board of directors, which includes a handful of members with operations in Orange County, including Broadcom, The Irvine Co. and Verizon.

“We don’t know what type of companies are going to apply, but Orange County in some ways is very similar to San Diego with strong life sciences and medical device sectors, as well as a strong tech sector,” said Moore.