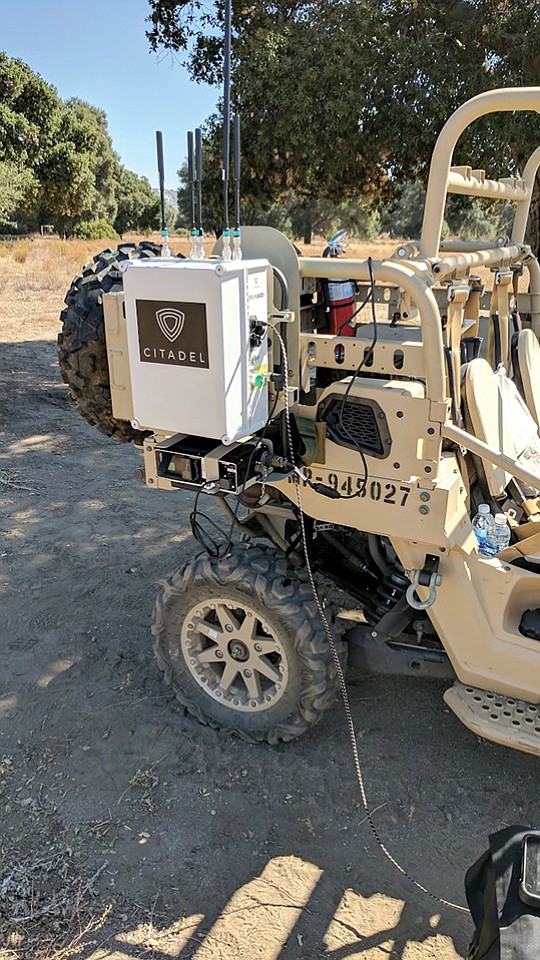 Citadel Defense electronics, which can disable approaching drones, ride on the back of a U.S. military vehicle. The National City company continues to grow on military contracts. Photo courtesy of Citadel Defense

San Diego — The riddle of the drone has San Diego companies captivated. While it is one thing to build a working piece of technology, the real puzzle may be how to build a sustainable small business around it.

Twining’s observations about manufacturing — which can be “a pain” — were part of “Drones Over San Diego,” an MIT Enterprise Forum program on June 20 at the Knobbe Martens law office in Carmel Valley. Representatives from four early-stage San Diego drone companies participated and most spoke of having to adjust their focus.

Christopher Williams said his concern is producing equipment as fast as possible. Williams is chief operating officer of Citadel Defense Co., a National City business that builds radio technology which can disable other people’s quadcopters before they cause an incident.

The larger market opportunity is the commercial world, Williams said in a subsequent interview, but the company is getting immediate sales from the military. U.S. forces have used Citadel’s technology successfully in combat zones, and Williams said he has spoken to troops operating it.

There has been a need for such technology ever since insurgents dreamed up the idea of using quadcopters to deliver explosives.

Citadel has grown from 15 to 25 employees in four months and it has deployed more than a dozen systems. Military clients include special operations forces. The business builds its products in-house but is seeing so much work that it is making the transition to a contract manufacturer.

On June 27, Citadel announced it was one of 10 companies selected to be part of a U.S. Air Force technology development program. It includes an undisclosed amount of funding as well as access to Air Force facilities.

The MIT event saw three company representatives discuss the problems inherent in sourcing electronics for a federal customer. The price point must be low, Williams said, yet the Defense Department advises staying away from low-price products made in certain countries.

Focusing a company’s business model includes deciding which market to address. There are many options.

Amir Emadi is the San Marcos-based CEO of Skylift Global Inc., which is developing an unmanned helicopter with three large, horizontal rotors able to carry 100 pounds.

After evaluating a number of markets, Emadi said Skylift is focusing on public safety, specifically firefighting.

Firefighters spend 90 percent of their time shuttling equipment, he said. Skylift says its Atlas drone will be able to ferry firefighting equipment such as hoses to the front lines.

After adjusting the company’s focus, Emadi said he no longer views Skylift as a technology company. “We’re becoming a firefighting company with a tech problem.”

Skylift is trying to raise $200,000 and is building relationships with fire departments.

Audience members at the MIT event wanted to know why San Diegans aren’t seeing pizza or package delivery using quadcopters. Regulation, said the panelists. The Federal Aviation Administration has not given the OK for unmanned aircraft to do several things, including fly beyond an operator’s line of sight.