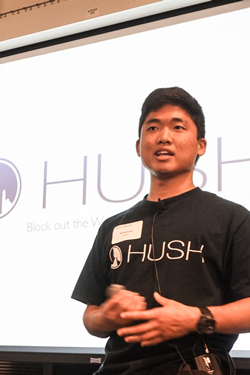 The startups ranged from genomics to software and hardware to sales force solutions, and are seeking from $100,000 to $1.5 million in funding.

The winning company, as decided by a vote of the 280-member audience, was Hush, the brainchild of three recent University of California, San Diego graduates, all of whom — coincidentally — are named Daniel.

“Looking back on college, you know what I hated the most? The parties,” said Daniel Lee, CEO of Hush, only slightly tongue-in-cheek. “You know why? Because I was always the guy on the other side of the wall trying to sleep through those parties.”

Lee said this is a near-universal problem, whether it’s loud neighbors or a snoring partner or animals causing the ruckus. And it is a problem, as more and more studies show the importance of sleep to overall health.

Lee said the implications go even further than physical well-being: 60 percent of married couples say noise from snoring is an issue, and it leads one in four couples to sleep in separate rooms.

“Hush is the world’s first smart earplug that combines [earplug and white noise generating] solutions to achieve a whole new level of noise exclusion,” Lee said. “But Hush is smart in that instead of indiscriminately blocking out all sound, Hush connects wirelessly with your smart phone so that you can still hear the notifications that you need — for example, an alarm clock or emergency phone call.”

Added bonus: Only you can hear said alarm or call, not anyone else around you.

With the booming wearable market, Lee said, the opportunity for Hush is huge. The startup is raising $200,000 — $50,000 of which is already in their coffers — to fund product development and marketing.

“That will sustain us until the end of November, and by then we’ll have presale revenue,” he said. They aim to ship Hush by March of 2015.

The second-place winner was software company Koriist, whose product allows legacy and new communications platforms — initially mainly military systems — to communicate with one another.

“We have a data network IP and non-IP router, and what we do is we provide a software that stitches together digital infrastructure,” said Chad Trytten, CEO of Koriist, explaining that military radios from the 1980s, which are still in use, can’t talk to new radios, which leads to problems for the war fighter.

“We provide software that allows these incompatible systems and machines to talk to each other over the existing networks, without ripping up and replacing them,” he said.

The market for this is large. Trytten said there are 500,000 of these military radios in the field today, and the military is looking to upgrade half of them to newer systems, meaning interoperability will be key.

Koriist is raising $450,000 to put toward developing a sales team, since the technology itself is already up and working.

The other four startups didn’t disappoint. First up was Footprints, which uses geo-fencing to send sales reps data points and targeted information about the customers they’re meeting to increase engagement and, ultimately, sales.

“If I had [this system] when I was a rep, my phone might vibrate when I walked into an account to tell me that a customer hasn’t ordered a product in three months. My iPad might alarm me to say, ‘Hey there’s a conference coming up and your customer at this account is registered — invite him to our breakfast.’ My smartwatch might tell me it’s the customer’s birthday. That stuff moves the needle and changes the perception for the customer.”

Footprints is raising $1.5 million, but Friedman advised investors to act quickly, as this round is closing next month.

Tab32, in the medical software space, solves the problem of dentists using antiquated, inefficient paper and digital patient records with a HIPAA-compliant platform that handles patient information, billing and can even help dentists upsell their products.

“The physicians market has evolved from paper to the cloud, and the dental market follows the physicians market,” said Tab32 CEO Kiltesh Patel. The company is raising $1 million, which Patel said will go toward building a team, and the quick on-boarding of 50 dental practices.

Staying somewhat in the medical realm, AllSeq has developed the world’s first DNA sequencing marketplace, connecting researchers or customers with sequencing work to labs capable of doing the sequencing.

“These labs spend enormous amounts of money setting up labs with the newest DNA sequencing technologies, so running at 75 percent or less capacity, which most of them do, makes a bad business case,” said Michael Heltzen, CEO of AllSeq.

This platform connects them to new customers and sales, while helping researchers or medical patients needing this information t find the lab with the appropriate technology catered to their needs.

AllSeq is looking to fundraise $1.5 million.

With the booming mobile market and the large gaming component within that, computer vision software company Playmotion is positioned as “the enabling technology that will turn a mobile device into a game console,” said Matt Flagg, chief technology officer.

The startup’s software allows users to play smartphone games on a big-screen television using gestures, without having to modify the existing game application.

Playmotion is raising $1.1 million to bring its product out of the lab and into the living room.

Michele Yoshioka, director of programs and operations at CommNexus and EvoNexus, said this was the best-attended event yet. The third DemoDay is scheduled for sometime in March after the incubator gets its newest cohort of companies in November.