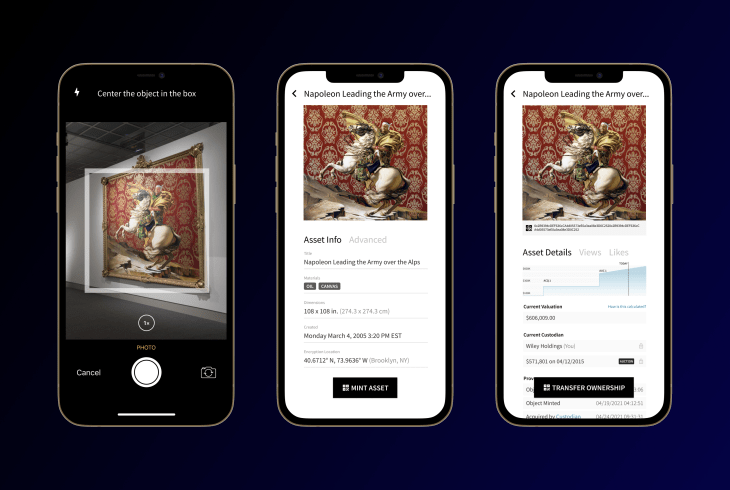 Reshaping ownership proofs in the fine art markets has been one of the blockchain’s clearest real-world use cases. But in recent months as top auction houses have embraced NFTs and popular artists experiment with the crypto medium, that future has seemed more tangible than ever before.

The ex-Christie’s and Sotheby’s team at Lobus is aiming to commoditize blockchain tech with an asset management platform that they hope can bring creator-friendly mechanisms from NFT marketplaces like SuperRare to the physical art world as well, allowing art owners to maintain partial ownership of the works they sell so that they can benefit from secondary transactions down the line. While physical art sellers have grown accustomed to selling 100% of their work while seeing that value accrue over time as it trades hands, Lobus’s goal is for artist’s to maintain fractional ownership throughout those sales, ensuring that they earn a commission on sales down the road. It’s a radical idea and a logistical nightmare made feasible by the blockchain’s approach to ownership.

“We’re really on a mission of making artists into owners,” Lobus co-CEO Sarah Wendell Sherrill tells TechCrunch. “We are really leveraging the best of what NFTs are putting out there about ownership and asking the questions of how to help create different ownership structures and interrupt this asset class.”

The startup is encapsulating these new mechanics in a wide-reaching art asset management platform that they hope can entice users of the aging legacy software suites being used today. Teaming robust ownership proofs with a CRM, analytics platform and tools like dynamic pricing, Wendell Sherrill and fellow co-CEO Lori Hotz wants to give the art market its own Carta-like software platform that is approachable to the wider market.

A big goal for the team has been removing the complexities of understanding what the blockchain is and instead focusing on what their tech can deliver to their network of art owners. While the NFT boom of the past few months has already produced billions in sales, efforts like Lobus are attempting to cross-pollinate the mechanics of crypto art with the global art market in an effort to put stakeholders across the board on the same footing. In addition to having partnerships with around 300 active artists, Lobus has also sold their platform to collectors, artist estates and asset managers.

At the moment, Lobus has around 45,000 art objects in its database, encompassing about $5.4 billion in asset value across physical and digital objects.