How low can satellites go? VLEO entrepreneurs plan to find out

SAN FRANCISCO — Skeyeon CEO Ron Reedy knew flying satellites at low altitudes could slash the cost of a constellation. He didn’t know if there were any showstoppers.

“I asked the team to prove it would not work, which is kind of backwards for an entrepreneur,” Reedy said. “After more than a year, they said, ‘Not only can’t we prove it won’t work, we think we proved it will work.’”

That was 2017. Since then, San Diego-based Skeyeon (pronounced sky-on) has been developing and testing key components for a constellation of small satellites to provide high-resolution daily Earth imagery from an altitude of about 250 kilometers.

Why all the interest in VLEO? Satellite costs often rise with their altitude.

“None of this is easy, but the payback is potentially very significant if you can get these ideas to work,” said Peter Roberts, Discoverer scientific coordinator and the University of Manchester Aerospace Research Institute space theme lead.

Decreasing a satellite’s altitude from 650 kilometers to 160 kilometers leads “to a 64x reduction in radar RF power, 16x reduction in communications RF power and 4x reduction in optical aperture diameter to achieve the same performance,” Thales Alenia Space explained in a 2016 paper on Skimsats, the small satellites the French-Italian company designed for VLEO.

“To get higher resolution and still play in a smallsat world, your only option is to go lower,” said Scott Herman, Cognitive Space CEO and former BlackSky chief technology officer.

Of course, there are challenges associated with VLEO. Below an altitude of 450 kilometers, atmospheric drag will shorten a satellite’s lifespan unless onboard propulsion or an external force boosts it higher. (Cargo vehicles and onboard thrusters help the International Space Station, which resides around 400 kilometers, maintain its altitude.)

VLEO satellites have been flown before. The European Space Agency’s Gravity field and steady-state Ocean Circulation Explorer spacecraft, called GOCE, remained at altitudes of 240-280 kilometers from 2009 to 2013 with the help of xenon-fueled electric thrusters.

Xenon also powered the electric thrusters that kept the Japan Aerospace Exploration Agency’s Super Low Altitude Test Satellite (SLATS) at an altitude of about 200 kilometers from 2017 to 2019.

Fortunately for small companies focused on VLEO, a variety of new lightweight electric thrusters are proving themselves in laboratories and on orbit. In addition, Germany’s University of Stuttgart Institute of Space Systems has Discoverer funding to test key technologies for Air-Breathing Electric Propulsion, a thruster that turns atmospheric particles into propellant for VLEO satellites.

And atmospheric drag isn’t all bad. It limits debris in VLEO and ensures satellites quickly reenter Earth’s atmosphere when they are no longer useful. 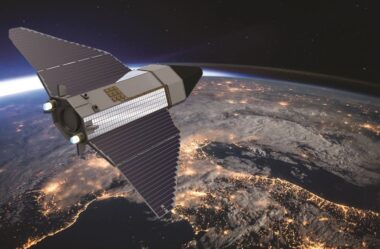 NOT YOUR FATHER’S SATELLITE

Unlike boxy satellites popular for higher orbits, VLEO satellites may be cylindrical or pointed like an arrowhead to reduce atmospheric drag.

The Aerospace Corp. sees VLEO as a promising application for DiskSat, a satellite shaped like a plate with onboard thrusters to keep it upright. As part of a DiskSat demonstration, Aerospace plans to perform sustained operations at altitudes as low as 250 kilometers, said Richard Welle, Aerospace Corp. senior scientist for Mission Systems Engineering.

University of Manchester researchers are testing materials to reduce drag on the ground in their Rarefied Orbital Aerodynamics Research facility and in orbit onboard Satellite for Orbital Aerodynamics Research (SOAR), a Discoverer-funded cubesat deployed from ISS in June. SOAR is equipped with a spectrometer to measure atmospheric density and composition, and wind velocity. The three-unit cubesat also has fins that act like aircraft flight control surfaces.

Whatever materials limit drag also must prove resilient to high levels of atomic oxygen in VLEO.

An instrument onboard JAXA’s 400-kilogram SLATS measured atomic oxygen and monitored its effect on sample materials. Similar research is continuing in laboratories around the world.

“At one point, atomic oxygen looked like the killer problem,” Reedy said. However, Skeyeon later identified promising sample materials in a dedicated atomic oxygen test facility, which the company is now trying out on an exterior ISS platform.

Satellite constellation operators are well aware of the benefits of VLEO.

Planet lowered the altitude of Earth-observation SkySats from 500 kilometers to 450 kilometers in 2019 to improve the resolution of SkySat imagery.

SpaceX revealed plans to send some 7,500 Starlink satellites to altitudes between 335 and 346 kilometers under a plan approved in 2018 by the Federal Communications Commission.

Earth Observant is developing a VLEO Earth-imaging satellite with a 2020 U.S. Air Force Small Business Innovation Research contract. The contract funds work on a satellite capable of collecting 25-centimeter-resolution imagery and transferring data “directly to the warfighter” in minutes, according to an abstract posted on the SBIR.gov website.“It’s incredibly low cost, if that would get us daily re-imaging at one meter resolution for three years,” Reedy said. 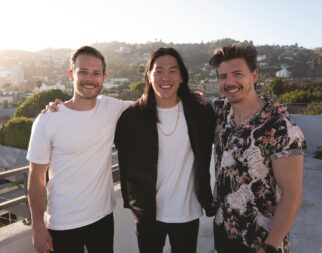 Founders of Albedo, a startup focused on capturing Earth imagery with a resolution of 10 centimeters per pixel. Credit: Albedo

Albedo CEO Topher Haddad wasn’t focused on VLEO until he started looking for a way to obtain Earth imagery with a resolution of 10 centimeters per pixel. The first step was figuring out “how low can we fly,” Haddad said.

A rancher who contacted Skeyeon, for example, was unable to find affordable, daily one-meter-resolution imagery showing his cattle gathering at dozens of watering holes.

New VLEO constellations may fill that type of new niche if they succeed in raising money for new constellations and tackling the various technological challenges.

“A lot of the issue with very low Earth orbit generally is moving the mindset of people who are more conventional in terms of low-Earth orbit satellites and proving there are definite benefits here and the problems aren’t insurmountable,” Roberts said.

This article appears in the October 2021 issue of SpaceNews magazine.