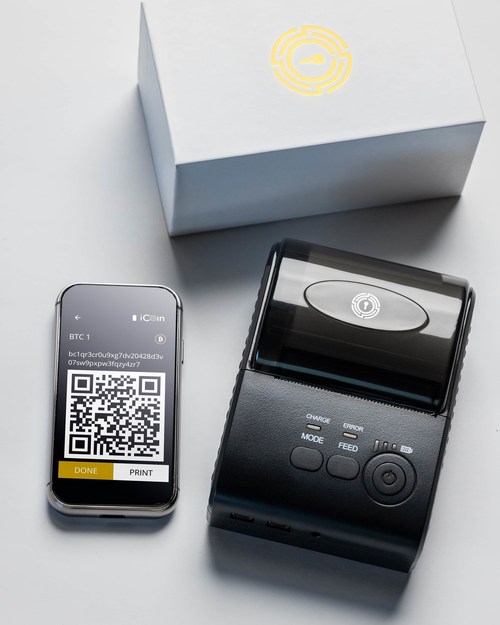 “The iCoin Wallet System is the new standard in crypto asset protection and ease of use,” said Chet Silvestri, CEO of iCoin Technology. “Crypto enthusiasts and beginners alike are beginning to realize that holding custody of their cryptocurrency and NFTs on a hardware wallet is the way to go, but until now there has not been a solution that is easy to use, easy to operate, easy to keep secure, and easy to extend. About the size of a mini smartphone, the iCoin Wallet does it all in a stylish and secure package.”

The iCoin wallet is a physical device that operates as cold storage, making it difficult for hackers to extract private keys since the device is never directly connected to any blockchain or the Internet. Unlike a smartphone, the iCoin hardware wallet has no hardware or software support for Wi-Fi, cellular or GPS communication, which can threaten security. It uses a camera and displays QR codes to receive and send information to the iCoin Mobile App (air gap connection) which runs on iOS and Android smartphones. The iCoin Mobile App uses the smartphone Wi-Fi or cellular connection to relay the transaction information to the blockchain. iCoin also operates its own full node blockchain server for improved transaction security. An optional Bluetooth printer securely connects to the hardware wallet for seed phrase and other printouts.

Headquartered in Silicon Valley, iCoin Technology is a pioneer of a new class of hardware wallets for the digital economy, blending consumer-grade ease-of-use with industrial-strength air-gap security. The iCoin Wallet System simplifies and secures cold storage of multiple crypto assets, such as Bitcoin, and serves as an integral part of personal digital finance. It provides a 3-inch interactive touchscreen, camera for QR codes, secure processing and storage of cryptographic keys, and an optional printer. The iCoin Wallet System is available from both Verizon and iCoin Technology. iCoin Technology is a member of the Silicon Valley Fintech Incubator founded by Franklin Templeton and EvoNexus. Learn more at iCoinTechnology.com.

Micruity Co-Founders, Trevor Gary and Chris Livadas, on Ensuring Every American Has Access to Secure Retirement