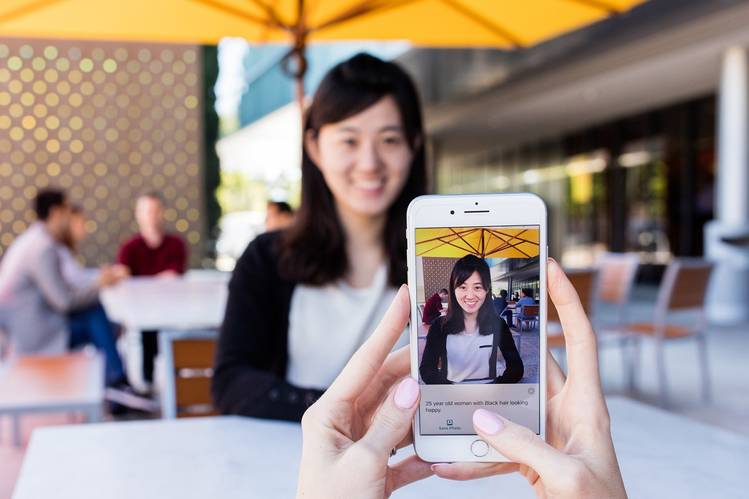 The Seeing AI app narrates the scene aloud, including faces—with name, if it recognizes someone. PHOTO: MICROSOFT SEEING AI
May 28, 2018 10:07 p.m. ET
By Chris Kornelis
Since losing his vision at age 13, Erik Weihenmayer has summited Mount Everest, white-water rafted and climbed frozen waterfalls. But making soup in his kitchen presented a unique challenge. On a frozen waterfall he could tap his ax against the ice to get a feel for its density, but in the kitchen, he had no way to differentiate between cans of tomato and chicken noodle.

Mr. Weihenmayer, 49 years old, found a solution in Microsoft Corp.’s Seeing AI, a free app for the visually impaired. Among other things, the app can recognize faces, identify money, read handwriting and scan bar codes to differentiate between cans of soup.

“It is a game-changer,” says Nathan Brannon, a blind 54-year-old Seattle resident who tests software for accessibility.

Seeing AI is just one of the artificial-intelligence-powered products that are helping blind and vision-impaired people live more independently. Improvements in voice recognition and computer vision, along with machine learning, have led to specialized products such as Seeing AI, as well as mainstream devices like the Amazon Echo, that are allowing the visually impaired to tackle everyday tasks sighted people take for granted. Advocates for the blind say these technologies have the potential to fundamentally change the mobility, employment and lifestyle of the blind and vision-impaired.

Microsoft says it has no plans to monetize the app, which launched in 2017, calling it part of the company’s efforts to empower all people, including those with disabilities.

Of course, many of the voice-activated devices that have become powerful aids for the blind, such as Amazon’s Echo and Google Home, weren’t specifically designed for them, or with philanthropy in mind.

Mike May and his wife, both of whom are blind, have about a dozen Alexa-connected devices in their home that do everything from turn off the lights to tell them when a load in the washing machine will be done. “It’s become so much a part of my life that I almost don’t even think about it anymore,” says Mr. May, who works at Wichita, Kan.-based Envision, a provider of services for the blind and visually impaired.

Where AI Can Help

Both Mr. May and Mr. Weihenmayer also use a product called Aira, which uses glasses with a camera, sensors and network connectivity to connect the visually impaired to human agents, who act as visual interpreters. The reps can describe users’ surroundings and assist them with tasks such as online searches.

“They have it done in two minutes,” Mr. May says of online searches. “It takes me 10 times as long and I’m fairly proficient.”

Mr. May once used Aira, made by Aira Tech Corp., to get a different look at Seattle’s Pike Place Market, which he usually navigates with the help of a guide dog. The Aira rep described the scene in detail, Mr. May says, right down to the interesting tattoos adorning a checkout person. The technology costs between $89 (for 100 minutes) and $329 (unlimited minutes) a month, though some hotels, airports and retailers offer free access to their guests through a program called Aira Access.

“I think this technology gives people the confidence to go out and explore unknown areas where you just might be a little bit hesitant to go out as a blind person,” says Mr. Weihenmayer, a co-founder of No Barriers, a nonprofit that supports and advocates for people with disabilities.

Aira uses artificial intelligence for some tasks already, such as identifying pill bottles, says Suman Kanuganti, founder and chief executive of Aira Tech. But he expects AI eventually to take over more of the work the human reps are now doing, such as navigating. 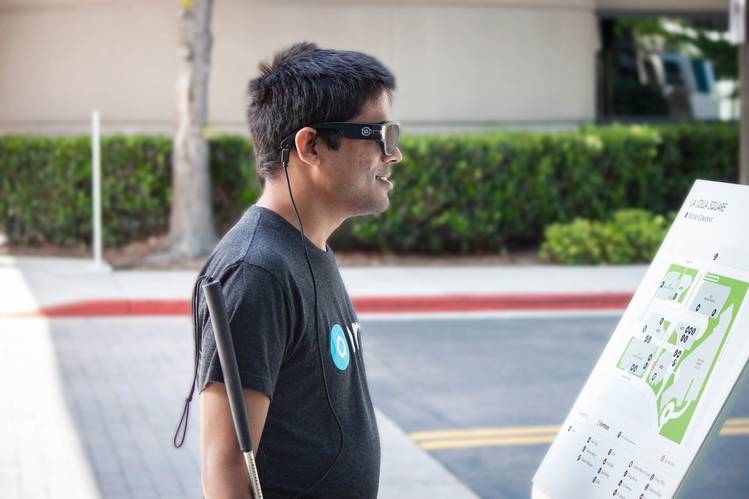 Aira glasses have a camera and connect wirelessly with human agents who act as visual interpreters–for example, reading a map to help a user navigate to his destination. PHOTO: AIRA TECH CORP

Aira has raised roughly $15 million from investors. Mr. Kanuganti says its user base is in the low thousands and it has provided more than one million minutes of services in more than 100,000 sessions.

One major hurdle to bringing specialized products for the blind to market is the size and disposable income of the target audience. The World Health Organization estimates that of the 253 million people world-wide who live with vision impairment, 36 million are blind. The Census Bureau estimates that more than seven million Americans are visually impaired. Many of them are unemployed or underemployed.

“You cannot build a business around only blind people,” says Ziv Aviram, co-founder and CEO of Israel-based OrCam, the maker of the MyEye 2.0 device, which is targeted at people with low vision but can be used by the blind, as well. “You can do philanthropy, but not business.”

MyEye 2.0 mounts onto the side of glasses and can recognize money, faces and surroundings. When users point their fingers at signs or menus, MyEye can read them. The device, which costs around $4,500, in some cases is covered by the Department of Veterans Affairs, as well as some workforce associations, OrCam says.

Robert Beckman, the CEO of Middleton, Wis.-based Wicab Inc., says his company’s $8,000 BrainPort V100 device is out of reach for most blind people. The device consists of a camera mounted to a pair of sunglasses that relays images to a plate of sensors that users hold in their mouths. The sensors electronically sketch an image of what the user is looking at onto the user’s tongue. So far, Mr. Beckman says he has been unable to get Medicare to cover the device, and insurance companies have covered it only on rare occasions. As a result, the company has sold fewer than 100 units, he says.

As much as blind people need specialized technology, building accessibility into mainstream products may be an even bigger need, say advocates such as Mark Riccobono, president of the National Federation of the Blind.

He points to the iPhone, which had accessibility built into it from the beginning.

“I can go down to the Apple store and pay the same price and triple-click the home button and I have VoiceOver,” says Mr. Riccobono, referring to a feature where the phone will describe aloud what is happening on the screen. “That’s built in, it’s great, it doesn’t cost a penny extra.”

One coming mainstream technology that could be life-changing for the blind is the driverless car.

“Transportation can be a very large barrier in the lives of blind people,” impeding everything from employment to education, says Eric Bridges, executive director of the American Council of the Blind. “Having the ability to have one of these vehicles come and take you where you want to go, when you want to go, and not be constrained by the paratransit system or the fixed-route system,” promises a greater level of independence and freedom, he says.

In a white paper last year, the Ruderman Family Foundation, which advocates for the inclusion of people with disabilities in society, claimed self-driving vehicles “would enable new employment opportunities for approximately two million individuals with disabilities, and save $19 billion annually in health-care expenditures from missed medical appointments.”

Mr. Bridges and Mr. Riccobono are pushing manufacturers to keep the blind in mind when designing driverless cars. Specifically, they want the car’s controls and console to be accessible to those who can’t see, which “probably means more than just having it talk,” says Mr. Riccobono.

Waymo—Alphabet Inc.’s self-driving-car unit, which plans to launch a self-driving-car service this year—says it is putting audio tools and Braille labels inside its cars to allow visually impaired riders to do everything from pull the car over to call an operator. “We continue to learn about the unique needs of different riders, and what we learn will inform new features that will make the experience accessible to people who have historically had to rely on others to get around,” Waymo said in its 2018 Safety Report.

Anna Catherine Walker, a 17-year-old visually impaired high-school junior in Mechanicsburg, Pa., says she, for one, can’t wait. “I live out in the middle of nowhere,” she says. “I want to be able to leave without having to drag someone along with me.”

Baking accessibility into the driverless car and other technology products could have ramifications beyond the vision-impaired community. Anirudh Koul, a senior data scientist at Microsoft who helped launch Seeing AI, says history is rife with examples of products and technologies that were developed for or inspired by the needs of the blind that resulted in mainstream products—such as audiobooks and scanners. He has already seen mainstream crossover with Seeing AI, such as sighted customers in Asia using the app to learn the English word for the object in front of them, and technicians using the app to read hard-to-access text on the back of servers.

Mr. Kornelis is a writer in Seattle. Email him at reports@wsj.com.