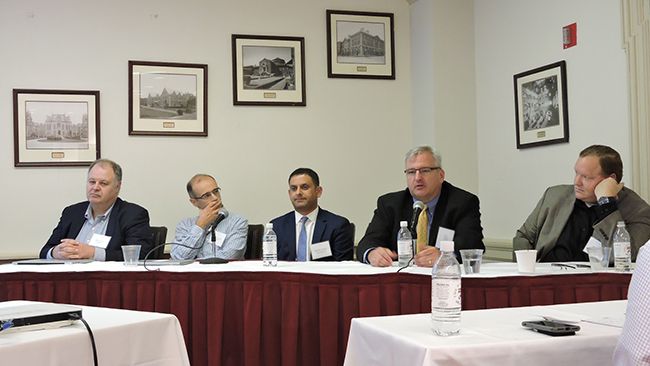 This morning I attended a most interesting conference on artificial intelligence at the Penn Club in midtown Manhattan. The meeting featured startups, as well as chip-equipment giant Applied Materials (AMAT), and it was hosted by Pierre Ferragu, who recently left his post as tech analyst at Bernstein, to take up a new role covering many areas of tech at New Street Research, a research-only firm with no brokerage business. (My profile of Ferragu was published in April.)

The focus was very much on what kinds of chips will be used for “accelerating” articulated intelligence approaches such as “deep learning.”

And it was a good survey of the varying opinions of how dominant Intel (INTC), Nvidia (NVDA), and Xilinx (XLNX) will be in the future of computing.

The speakers generally agreed that silicon for AI of one sort or another will be a $15 billion market annually sometime in the next five years, and that number, they agreed, may turn out to be too conservative. The question is what kinds of chips will those be?

The most extreme view was offered by Niel Viljoen, who is founder and chief executive of one startup, Netronome, which is making a network-acceleration chip.

Viljoen’s view is that Intel’s microprocessors will be more and more a minority of computing as new kinds of chips take over. “The CPU will be less involved with every bite,” said Viljoen.

“The architectures” of chips, he said, “will be about fabrics and the accelerators, and something we didn’t touch on, memory, how it is organized and how that distribution happens” for memory chips such as DRAM.

Although Nvidia’s prominence is recognized in AI, with its GPUs, the speakers were pointing to a future in which many kinds of chips will be used, including very novel types that focus more heavily on memory circuitry rather than just compute circuitry. That view was reinforced by another startup, Mipsology, which is making software to better use “field-programmable gate arrays,” the programmable chips sold by Intel and Xilinx and Lattice Semiconductor (LSCC).

Another startup presented the case for an entirely different kind of chip for AI. Syntiant, which just came out of “stealth mode” a couple weeks ago, and most of whose executives came from Broadcom (AVGO), is making a  chip that is focused on memory, and that uses analog chip expertise more than digital-semiconductor approaches, more akin to what one finds in companies such as Analog Devices (ADI).

As CEO Kurt Busch described the company’s chips, “We are doing the computation in memory […] We are 100% eliminating that memory bandwidth bottleneck” in conventional memory chips.

Syntiant focuses on using those memory chips for “edge” devices, things like cars and smartwatches and other things with tight power constraints and that can’t always connect to cloud data centers for machine learning.

In other words, such AI is what one would call “inference,” using a computer already trained on data to answer specific questions in the field, as opposed to the “training” phase where the AI algorithms are still developing the “model” the computer should use to answer questions.

Busch agreed that for the foreseeable future, the actual training of the system will still happen in the cloud, where massive amounts of computing are required.

Daasity, an EvoNexus portfolio company, investing $15M in data so consumer brands can do more with it - TechCrunch