Syntiant, a startup developing AI edge hardware for voice and sensor solutions, today closed a $35 million round. CEO Kurt Busch says the funds will be used to ramp up production throughout the remainder of 2020.

According to a report published by Meticulous Research, the speech and voice recognition hardware market is expected to reach $26.8 billion by 2025. That’s because devices like smart speakers, smart displays, phones, headphones, hearing aids, and laptops require low-power chips to process utterances. While some system-on-chip offerings sport coprocessors to handle voice recognition, they’re often not able to accommodate multiple form factors.

Syntiant’s NPD100 and NPD101 processors measure about 1.4 millimeters by 1.8 millimeters and can run models with over half a million parameters. Packing a general-purpose ARM Cortex-M0 processor paired with 128KB of RAM, the chips consume less than 140 microwatts and enable onboard firmware security and authentication, keyword training, and up to 64 output classifications. 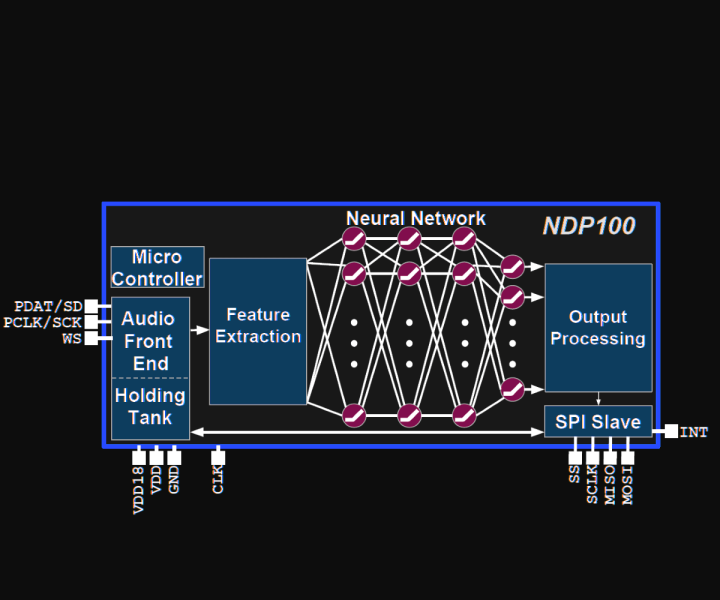 The NPD100 and NPD101 — which initially targeted performance of around 20 TOPS (trillion floating-point operations) per watt — use hundreds of thousands of flash memory NOR cells that read and write data one word or byte at a time. The processor-in-memory architecture was proposed by CTO Jeremy Holleman, a researcher at the University of North Carolina in Charlotte, as far back as the 2014 International Solid-State Circuits Conference. Syntiant asserts that the architecture is ideal for executing massively parallel operations in deep learning at low power.

Syntiant’s Neural Decision Processors ship with a software development kit (SDK) that integrates with virtually any integrated development environment and a “training development kit” (TDK) that lets developers use Google’s TensorFlow machine learning framework and other machine learning toolsets. (The TDK supports the Neural Decision Processors’ unique hardware characteristics. Developers train AI models on Google’s AI cloud service and download the results to the chip via the TDK.) The SDK and TDK include a hardware model that can be integrated into a training pipeline, along with step-by-step instructions for server configurations and Alexa wake word neural network models.

M12 (formerly Microsoft Ventures) and Applied Materials’ Applied Ventures led this week’s series C funding round, with participation from new investors Atlantic Bridge Capital, Alpha Edison, and Miramar Digital Ventures. This brings the company’s total raised to over $60 million. As part of the round, Applied Ventures investment director Michael Stewart joined Syntiant’s board, alongside Atlantic Bridge Capital’s David Lam, who will serve as a board observer.