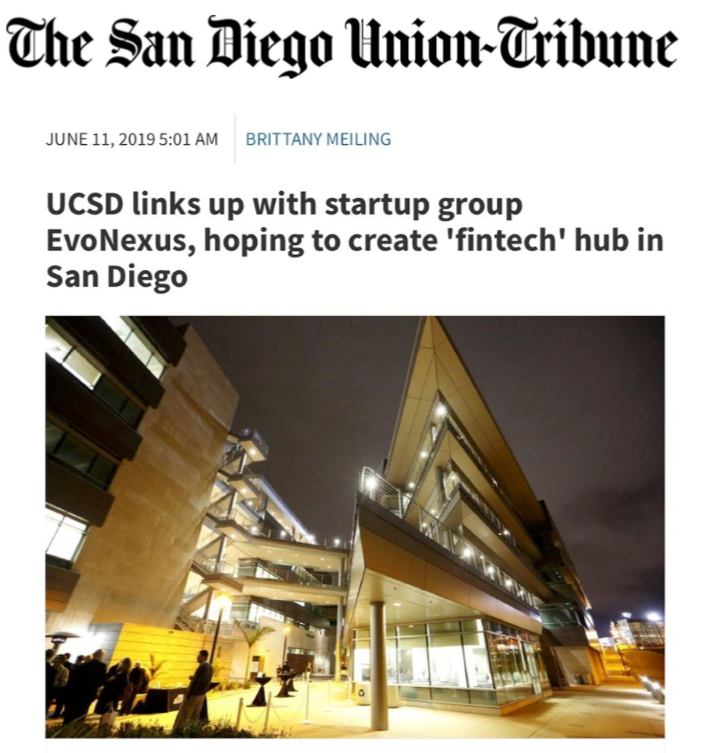 UC San Diego announced Tuesday that it has struck a partnership with local startup group EvoNexus, hoping to funnel more of its students and alumni into Evo’s new incubator for startups working on financial technology, or “fintech.”

EvoNexus, one of San Diego’s most popular (and most competitive startup) incubators, announced in April that it was expanding to form a separate program strictly for fintech startups. Backed by two large financial institutions, Royal Bank of Canada and Franklin Templeton, the incubator has space for 15 new companies.

Robert Sullivan, the dean at UCSD’s Rady School of Management, said the two organizations have been working together since EvoNexus first opened in 2010. But when he heard EvoNexus was launching a fintech incubator, he wanted to formalize their relationship and strengthen a pathway from the school to Evo’s program.

“What EvoNexus needs are the best and brightest ideas coming from startup companies, and that’s exactly what we produce,” Sullivan said.

“In San Diego, we can create an industry in finance through the use of technology,” Sullivan said. “This is an opportunity to do that.”

As part of the partnership, the university will encourage students and alumni to apply to EvoNexus’ program, with professors and other leaders on the lookout for promising startup ideas and entrepreneurs who could be a good fit with the incubator.

Rory Moore, CEO at EvoNexus, said the university has already been a valuable source of entrepreneurs, with 19 founding teams coming from UCSD. Four startups came directly from Rady School of Management, and all four are successful, he said.

“The success rate of ventures from UCSD is stunning,” Moore said in a statement.

The fintech incubator is looking for ideas from a wide range of disciplines, including analytics, data science, blockchain, cybersecurity, mobile payments and insurance technology, among other areas. The incubator is also interested in how 5G technology will influence the “digitization of financial transactions.”

Down the road, Sullivan said the two organizations would likely hold fintech conferences together to further solidify a knowledge hub in San Diego.