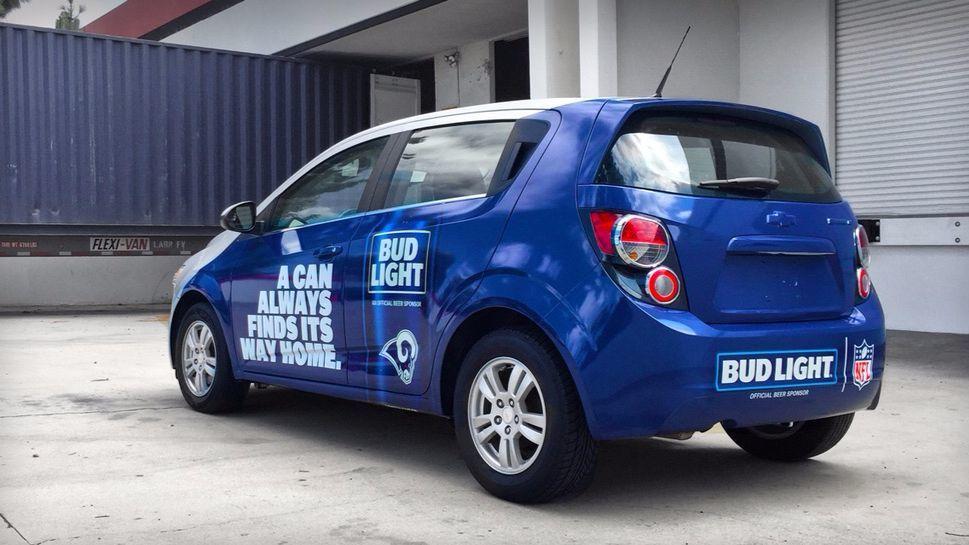 Los Angeles Rams fans attending Sunday’s game at the Coliseum will bear witness to something unusual: a swarm of cars, wrapped completely in Bud Light and team-themed laminate, circling the surrounding neighborhood. The flash-mob style parade of vehicles is part of an extensive, nationwide advertising campaign being run by Anheuser-Busch to promote its team-specific cans.

The cars, however; those are unique to L.A. They feature the Rams Bud Light can plus the message, “A can always finds its way home,” and they have been dressed up for the game by San Diego car-wrapping startup Wrapify.

Offering a hybrid of old and new outdoor ad tech, Wrapify has inked an eight-week deal with the corporate lager maker to celebrate the Rams’ return to Los Angeles. Eight specially wrapped cars will act as moving billboards and traverse designated parts of the city from now until the end of November. Though the cars won’t typically all be spotted in the same locale at the same time, they’ll be directed to the Coliseum on Sunday around game time to drive up extra buzz.

Launched in mid 2015, Wrapify pays regular people, on behalf of its clients, to drive around town in their own cars, which are covered in an advertiser’s messaging of choice for the duration of a campaign. The young company tracks drivers with a smartphone app and uses its own patent-pending technology to calculate the number of eyeballs that spot its moving billboards at any given moment.

“Anheuser-Busch is a huge player in out-of-home advertising. They’re the top media spender in their category. For them to trust one of their biggest brands (Bud Light) on our platform, it’s a big stamp of approval,” said James Heller, Wrapify’s CEO and founder.

The Wrapify formula factors in a variety of sources, including traffic data, time of day and road type, with the ultimate aim of making over the measurement tools for the out-of-home advertising market, a $7.5 billion industry in the U.S in 2016.

A little more than a year after its debut, the 16-person upstart is now running car-wrapping campaigns in 27 U.S. markets and has signed up more than 35,000 would-be drivers, who, when signed on to a campaign, get paid a few hundred bucks per month to drive around as they normally would.

“Swarm” feature allows advertisers to push their campaign drivers to a specific location at the same time.

Customers include Petco, Quest Nutrition, eBay, Lyft and now SWK Partners, the out-of-home agency that buys on behalf of Anheuser-Busch. Currently, though, Wrapify’s top-dollar client is GhostBed, an online mattress retailer that’s blanketing five markets with wrapped vehicles and will spend $1 million on ads over a 12-month period.

“Because Wrapify drivers have to turn on their app for tracking purposes, that gives advertisers a lot more granularity, in terms of the data that’s available to them, to really understand how effective that advertising is,” said Bryan Yeager, a senior analyst with analytics firm eMarketer.

In other words, the startup is in a position to give clients a depth of insight that they’ve never had before in the outdoor arena, where even the newer variety of digital billboards have limited reach and are difficult to measure.

At the same time, Wrapify, which has thus far raised nearly $3 million in capital from seed investors, is a tech startup operating in a funding climate that demands exponential growth all the time. Yet, the outdoor ad market is projected to grow by low single-digits each year to hit $7.9 billion in 2020, according to eMarketer’s calculations. Those market conditions will seemingly constrain Wrapify’s ability to consume ad dollars at a rapid enough clip to satiate big-exit-hungry venture capitalists.

Wrapify might successfully make the case, however, that its tech-based tools will allow it appeal to advertisers spending increasingly large sums on online ad buys, Yeager said. Conversely, industry spending on those types of ads is projected to reach nearly $69 billion this year.

One such tool, called “Swarm,” is every advertiser’s dream, Wrapify’s CEO Heller said. That feature allows the advertiser to push their campaign drivers to a specific location — say, a big sporting event like the Rams game — for a specific amount of time. Drivers are notified through push notifications on their smartphones and they’re incentivized to show up with the promise of extra money per hour.

“It’s like an on-demand billboard,” he said. “Advertisers love it.”