5G: A Brief History of Time

In late 1993 a good friend invited me out for drinks. I assumed he was going to encourage me to apply to the company he had joined two years prior. I had been working as a development engineer on 3D graphic rendering engines and 2D imaging for the previous seven years. While I sat at the bar waiting on my friend, I observed three business suits sitting nearby, bellowing into enormous analog Motorola flip phones, oblivious to the humanity surrounding them. In that moment I thought, “I am never going to see anyone using a high-performance 3D graphics engine at a bar. But people obnoxiously using a phone at a bar, the world will be all in on that”.  Well, I was half right. Nearly everyone sitting at a bar today has a cell phone in front of them. I’d also like to note that the phone in front of you today has one of the most power 3D graphics engines ever produced.

So how did we get from there to here? 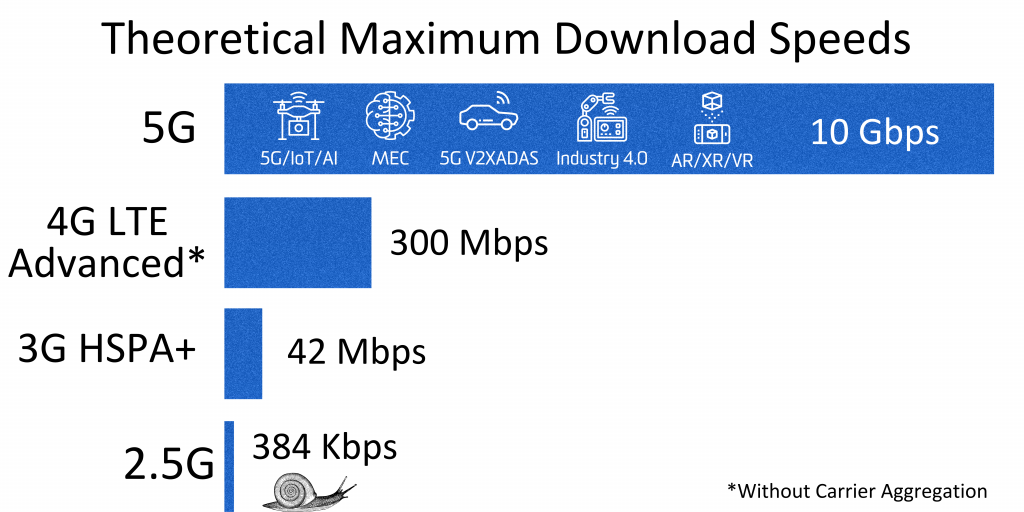 Near wireline voice quality. Vastly increased capacity at the cell tower. Encrypted voice. Suddenly cell phones went from an elite luxury item and business tool to something that many families could own. No more looking for pay phones, no more roadside breakdowns hoping for the aid of a passerby. Instant access to communication was at our fingertips, and for so many, family and friends were just a few key presses away at any time.

With the launch of 2.5G, data was introduced into mobile phones. Web browsing was done through specialized text browsers. The average speed of a 2.5G connection was 384 kilobits per second, which severely limited data performance. However, 2.5G gave a glimpse into the possible for consumers and technologists alike.

CDMA-2000 and UMTS were competing standards in this period. This competition drove innovation throughout the lifetime of the 3G standards, leading to a vast improvement in throughput speeds. This led to connections that were able to achieve theoretical maximum speeds of 21 Mbps. This speed, combined with the introduction of additional nascent features such as positioning, introduced a world of new possibilities in consumer grade mobile devices; mobile maps with directions, web surfing, reliable internet connection, video streaming, simultaneously accessing voice and data. While not as good as the applications on a PC, they were the start of a great migration to the mobile handset supplanting the PC in daily use for internet applications.

LTE’s theoretical upper limit of 300Mbps is clearly a vast improvement over 3G. Coinciding with the introduction of 4G, a vast array of cellular technologies were introduced and matured. Today with LTE, we have incredibly reliable and stable connectivity. On the mobile device, the main areas to compete in are the camera, with some lesser opportunities left to compete on power and performance. This overall maturing of the mobile communications devices and infrastructure has enabled a PC-like or better user experience across almost all applications, essentially enabling the mobile handset to overtake the PC as the go-to device for accessing the internet.

When I first entered the cellular technology industry, key executives struggled with the question of, “what will be the killer app for data?”. By the time we entered the 4G era the answer was apparent to all; the use case for data was and is the internet.

So here we are now, at the dawn of 5G. We have before us a 30X improvement in theoretical max throughput over 4G. We have sub 10ms latencies in 5G, and a device density of up to 1 million devices per square kilometer. What does all of this enable? Well, in a word, “more”. 5G drives the cost of network access down tremendously. This leads to the opportunity of placing a mobile wireless internet connection on just about everything; everyday appliances, industrial machines, all modes of transport, the stuff we wear, etc. All of these devices generate data. That data will be consumed; bought, sold, analyzed, and applied. Device autonomy, applications intelligence, remote operations, and so many more applications that exist today in bits and pieces will become more highly integrated, and ubiquitous.